By now I’m sure you’ve all heard of Hollie Singleton. She is the chicken pox party advocate who also said this, about “the weak”:

…illness keeps population in control and is meant to eliminate the weak and build a stronger species.

There’s nothing quite like love hearts from a eugenicist, is there?

Singleton appeared on several television networks, and in several news articles, and even became world infamous.  Here she is lapping up the attention on Sunrise:

Singleton gloated about the positive impact her narcissism would have for her personal endeavours. Here she is on December 7 2015:

Then, on December 11 2015, Singleton gloated some more about her emotional pay-dirt:

Yay! I was interviewed today for the Sunday Mail (in Brissy) about Chicken pox, and I’m very happy to keep climbing the media ladder!

Then, on December 14 2015, at approximately 1500 hours, Singleton was complaining about media harassment, accusing them of stalking her:

…I have media stalking me…Harassmant suits are being filed soon 🙂

Oh god I’m famous now! If I get a live interview, it’s on!

You read that correctly. She accused the media of harassing and stalking her; then, approximately six hours later she was back to gloating about her media exposure.

Since her penchant for for weeding out “the weak” was made world famous Singleton has been keeping a low profile. But, she’s back. And she’s on a roll.

Singleton’s story was shared by none other than Sherri Tenpenny, who thinks the poor thing is being picked on: 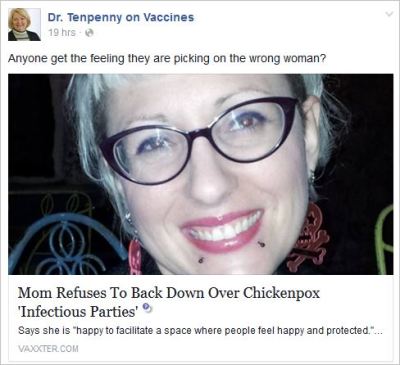 Singleton made an appearance in the comments, under Tenpenny’s post, declaring that her critics are “evil”. Meryl Dorey – of the anti-vaccination cabal, the Australian Vaccination-skeptics Network – has taught her well, it seems:

Yes evil people picking on me for doing something so normal

Deliberately inflicting disease upon hers and other people’s children is “normal”. It’s important to keep reminding ourselves of this point.

And if we have a look at exactly who liked this comment from Zoran Jev, we find that being offensive to people with a disability is also in the Singleton list of must-dos:

Zoran Jev Don’t let it get you down Hollie. The brainwashed sheep are just retards. They listen to mainstream media without doing any real research of the dangers of vaccines. Bill Gates said in an address to some university student. With proper health care and vaccinations , we can reduce the worlds population. 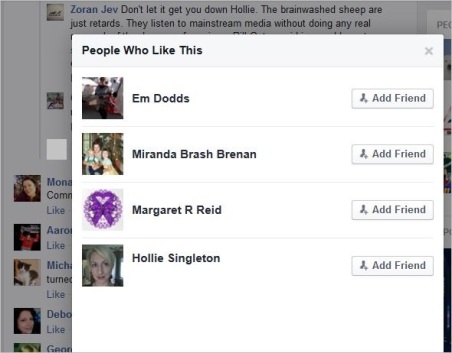 Back in the secret group, Vaccine Free Australia, one of Singleton’s colleagues pointed out Singleton’s infamy, yesterday afternoon:

And Singleton replied only some minutes ago that her critics are “stupid”, “dumb”, and “ignorant”:

I love the support I have from people who are not dumb or ignorant. The stupid people are the ones who refuse to look at the whole picture because they were taught to question and challenge information forced on them. Yet most are too stupid to know they are being forced fed also. Stupid can be stopped. Just read. Ask the hard questions. Demand more information. Be informed.

So, as long as you are not weak, retarded, stupid, dumb, and/or ignorant, you’ll get by just fine in Singleton’s new world order.

Bow down in front of your philosopher-queen, peasants.

Yes. Singleton now claims to be vindicated in all of her actions and all of her advocacy for deliberately infecting children, because she now claims her children did not have chicken pox.

The logic is not strong in this one. Plenty of hubris. Not much logic.