Posted on September 16, 2012 by reasonable hank

Two days ago I noticed a post on the official Facebook page of the National Vaccine Information Center (NVIC). The NVIC is the premier anti-vaccination organisation in the US. Its head, Barbara Loe Fisher, according the this Wikipedia article, “worked with Congress” on the National Childhood Vaccine Injury Act. This is meant to be a reputable organisation, run by reputable people, providing reputable information in regard to immunisation. Most of you reading this will be aware that this is questionable.

Two days ago, a photo was posted to the Facebook page of the NVIC, from the Twitter account of Barbara Loe Fisher, via Hootsuite. This photo contains text of a quote-mine from Dr Paul Offit, perennially taken out of context, completely misrepresenting Dr Offit. The intent of the description of Dr Offit is clear: “vaccine zealot” is included to enrage, provoke, incite, and vilify Dr Paul Offit. Here is the photo:

Published under Fair Use Provisions of the DMCA, and the Commonwealth Copyright Act 1968.

The quote itself is used and abused that often that it is almost a meme in itself. Liz Ditz has a nice post on the misuse of this quote, which has various forms: Did Paul Offit MD Publish A Study Proving The “100,000 Vaccines At Once” Claim?

I have an old Scribd document along the same lines, in which I stated:

What Dr Offit has stated is that due to the bacterial bombardment to which babies are subjected in everyday life, comparatively, and theoretically, children’s immune systems could respond to the equivalent of 100,000 vaccines, such is the minuteness of antigens contained in a vaccine. See here, page 174 of Dr Offit’s 2011 book, Deadly Choices.

Anti-vaccinationists never let content and context get in the way of a good old-fashioned Offit-bashing, do they?

Back to Fisher’s photo: did she get what she was hoping to incite? Did she what. Here are screen captures from the Facebook photo’s thread. Remember, this is from an organisation which sees itself as a legitimate lobby group, working closely with government representatives, on vaccine safety: 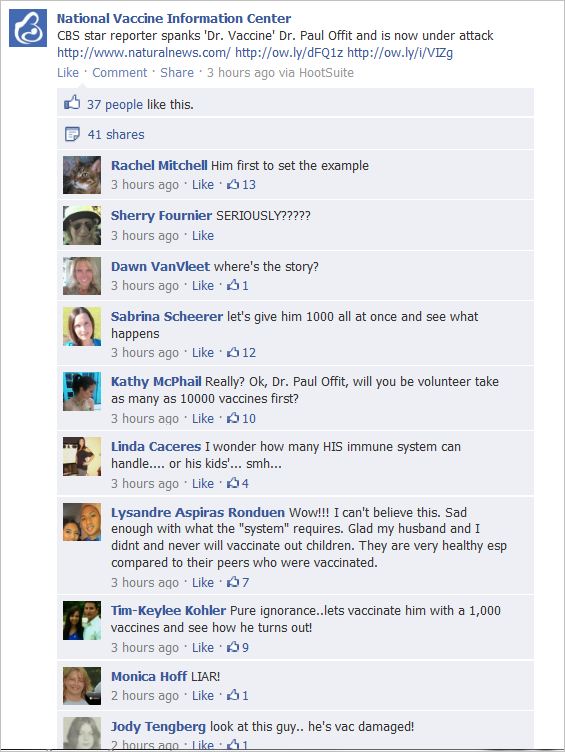 “If he was any more crooked, he’d be a politician…”

“asshole…idiot…’biostitute’…who whores for the pharmaceutical industry…poke his ass with 10,000 vacs”

“You look like a crazy person! You are crazy!…idiot…This idiot is fucked up and crazy…ass…idiot…what a moron…Idiot!”

If John Scudamore Scopies, does the universe unravel? There’s an event horizon in there somewhere.

So, there you go, folks. The USA’s premier vaccine safety (read “anti-vaccine”) lobby group in action, vilifying someone who has probably saved hundreds of thousands of lives.

You guys really need to get behind any Stop NVIC campaign, for public health.

11 Responses to The National Vaccine Information and Vilification Center